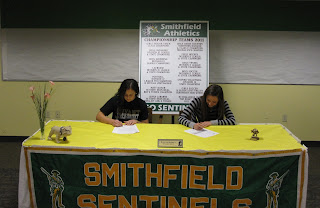 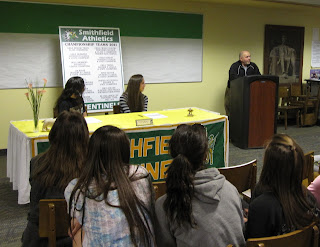 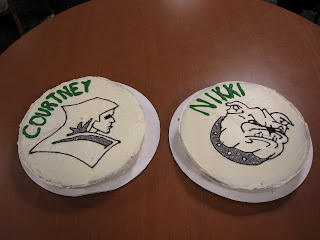 FOR IMMEDIATE RELEASE
Smithfield Athletes to Sign Letters of Intent

Contact:       Daniel Kelley (Principal)
Address:
90 Pleasant View Avenue
Phone:          (401) 949-2050
Email:           dkelley@smithfield-ps.org
Website:        www.shsri.org
SMITHFIELD – Smithfield High School is proud to announce that two senior athletes will be signing letters of intent to continue their athletic careers at the Division I level.  A signing day ceremony will take place on Tuesday, February 7th at 4 pm in the media center.
Courtney McGuire, a four-year soccer player, will be attending Providence College in the fall. She established herself as one of the most skilled soccer players in the state. A creative player with tremendous instincts for the game, she has received a lot of attention for her scoring, as the Lady Sentinels career goal scorer (81) and assist leader (40).  In 2009, Courtney was the team’s leader in points, guiding the team to a D-2 State Championship and receiving MVP honors. The transition to D-1 in 2010 did not slow her progress, scoring 29 goals & 11 assists and earning 1st Team All State honors. Courtney raised the bar in 2011 as the Sentinels finished as the State Runner up in Division I.   She scored an amazing 34 goals & 14 assists, earning 1st Team All State and NSCAA All Region honors. A true competitor, a great teammate, and a class act, Courtney is a student/athlete that has achieved excellence both academically and athletically during her distinguished high school career.
When Courtney was asked about her college choice she said, “I love the game of soccer and I have put forth a tremendous amount effort in improving my skills. Realizing that I had the potential to play at the college level motivated me to continue to develop my game.  It’s an awesome opportunity to attend Providence College where my friends and family can watch me play.
Courtney plans to study Chemistry.
Nikki is an outstanding athlete who excels academically and athletically.  Nikki has been a four-year starter on the Smithfield Varsity Field Hockey team.  As a defender, Nikki has scored an impressive 12 goals and assisted 22 goals.  In 2009, as a sophomore, she made 2nd Team All Division.  In 2010, as a junior, Nikki was a key player in her team achieving an undefeated season, becoming Division Champions and Division 2 State Champions.  In 2010 she was awarded 1st Team All Division, 2nd Team All State, All Tournament Team as well as Tournament MVP.  This past season, as a senior, Nikki shined.  Her skills, speed and strength stood out significantly.  Once again, Nikki assisted her team in completing an undefeated season and became Division Champions and Division 2 State Champions.  She received multiple awards such as 1st Team All Division, All Tournament Team and she was chosen to participate in the Rhode Island Field Hockey All Star Game.  Nikki’s largest compliment this past season was being chosen as a 1st Team All State player, an especially rare accomplishment for a division 2 athlete.
When asked about her college choice Nikki stated, “Ever since I was little I wanted to go to Bryant University. I live close to the campus and I’m always up there on the weekends practicing on the turf/running on the track. As soon as I did my official visit with the team, I knew I wanted to attend Bryant and play field hockey for them.”
Nikki plans to study Actuarial Mathematics and Business.
Athletic Director, Tony Torregrossa, commented, “We are thrilled to have two female student athletes continue their athletic careers at the Division I level.  This is a tremendous accomplishment for a small school.  I give a lot of credit to the dedication of the coaches and athletes.  We are extremely proud of their accomplishments.”
About
Smithfield High School (SHS) is a comprehensive high school located in Smithfield, Rhode Island, serving approximately eight hundred students in grades 9-12.  Fully accredited by the New England Association of Schools and Colleges (NEASC), is proud of its students’ record of academic excellence and service to the school and community.  The school’s mission is for SHS graduates to possess a common core of knowledge and skills to become life-long learners, analytical thinkers, effective communicators, and productive members of the global community.  For additional information on Smithfield High School, the “Home of the Sentinels”, please visit the school’s website at www.shsri.org.
# # #